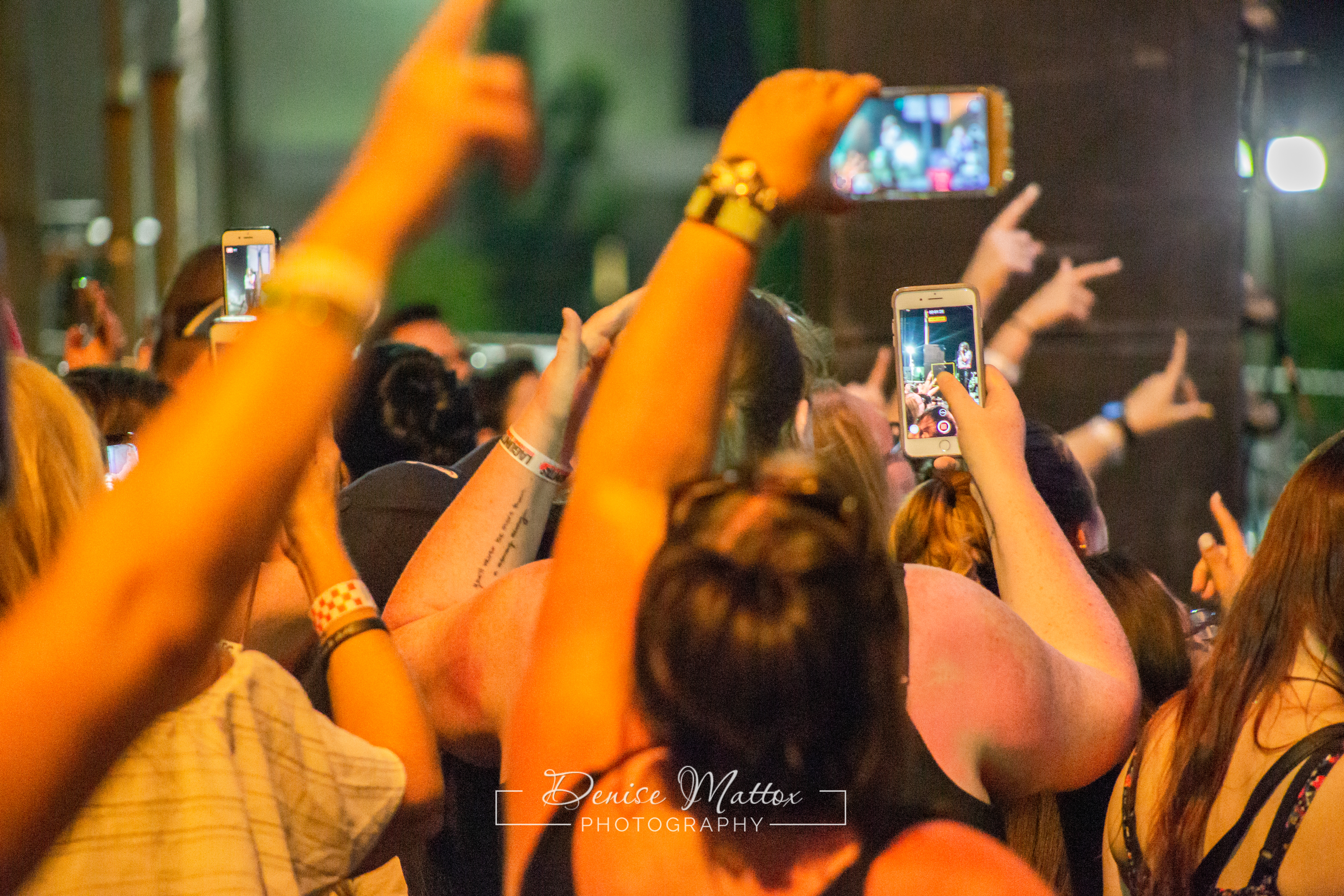 IT WAS JUST DIFFERENT

On Feb. 14, 1997, I attended my first concert, and in a roundabout way, it started me on the path that is my life now. It lead me to going to Fan Fair that year and declaring I wanted to someday do something that kept me close to country music.

Then I married a musician. Be careful what you wish for? I kid, I kid. I love my husband and our life… and I don’t blame that concert in 1997. I credit it.

Since moving to Nashville in late 2006, I can sincerely say Fan Fair/CMA Fest has been a steady part of my life in one way or another. I’ve watched it change… from being at the Fairgrounds, to taking over downtown, to having large portions of it free to the public after the economy crashed, to what it is now.

This year it was just different.

Now, granted, I had a very different role this year from in the past. I was a credentialed photographer following various artists around through the week. I wasn’t so much in the fan side as I was on the performer side. Therefore, I got to see a lot of things I never even really pondered in the past.

Being married to a touring musician, I have through the years become well versed in private security. They have an incredibly important job, and I am grateful for security and the fact that they stand between all of us and “the bad guys.” I respect their job more than anyone will know. That respect multiplied in the wake of things like the Vegas shooting. Security is SO important.

But I’ve also found so many on power trips over the last almost-15 years that I see private security shirt and I immediately feel my hackles rise. I’m instantly trying to figure out how to minimize my contact with them. This time, however, I was destined to deal with security often given the event and my job at it.

I could write an entire post about nothing but security. In fact I pretty much did and then deleted it because it got long-winded and ultimately started to get ranty. Suffice to say, I think a big part of the “different” was due to security, and I’ve heard other people say the same thing since then. It was all over the board, and the inconsistencies made things more than a little bit frustrating at times. And I can officially now say I got thrown out of an area for doing my job. (That I had credentials to be there, but the security guard decided to interpret a rule his own way. And then reverse his stance with another photographer moments later after I’d be told I needed to leave. Again. Inconsistent.)

CMA Fest runs officially for four days — this year, June 7-10 — but for Nashville its really an entire week. My week started on June 5th, and I kept going through the 10th. I spent more time downtown Nashville in those six days than I have in years. I found the city to be somewhat unrecognizable, with new bars all over Broadway. I spent time on Demonbreun, near the foot of Music Row, and I discovered places I didn’t know where there either. I’ve definitely pulled back from Nashville in a lot of ways over the years, and I’ll admit that rediscovering my city was kind of fun.

I still to this day have moments of, “I live here. I really do live here.”

I was sitting at the brewery where I work one day during CMA Fest, after I’d finished shooting for the day and had stopped in to have a beer and wait out the traffic going home. I started chatting with the guy beside me at the bar. He was visiting Nashville for the weekend to decide if he wanted to possibly move here. He was choosing between Nashville and Raleigh, NC.

As we chatted about his plans for the weekend, I told him, “You’re going to see Nashville at its best and its worst this weekend.” Thankfully, he understood immediately what I meant, and I realized the weight of my words long after I said them.

I love CMA Fest and how it’s still a big part of the charm of the country music industry — which is still a part of the charm of the city. I sat in on an interview with one of the artists I was following and they said they viewed CMA Fest as the soul of country music. Wow, right? You can beat the drum of Nashville being Music City, not Country Music City, but tell me you don’t instantly think of Nashville when you hear the words, “country music.”

When I moved here the city still very much embraced its roots in country music. Today, it’s a lot harder to find, which is okay! It just is what it is and music is evolving as much as this city is, too.I love that I can find such a wide variety of music here!

But for a week in June, we’re all reminded of its roots in country, and Nashville puts on one helluva party for country music fans. It is pretty incredible.

Okay, so Nashville can throw a party for anything, and they don’t do it small. It’s, frankly, one of the coolest things about the city in general. Country music fans, July 4th, New Years Eve, anything and everything. We can celebrate, and we can party.

But the city is more and more, well, city. For some people, that’s amazing and the draw of it today. Condos popping up everywhere. Mixed use buildings with specialty shops and restaurants. So many awesome options! But within that, it has no problem — excuse me — screwing over people. And it’s absolutely not prepared for the growth that’s come.

Traffic is horrendous. (I once joked I hated Austin because of its traffic issues, but today Nashville isn’t much better.) They love to close streets downtown for those awesome parties which make for gridlock. Parking is a headache and continues to be the bane of my existence. (I paid $60 dollars to park one day… SIXTY DOLLARS because I was running late and they had me over a barrel.) And you’re going to pay for an entire bottle of Jack Daniels if you have two shots in a bar.

My favorite part of the week, however, was discovering the fact that the people I had been a fan of for years were truly kind and good people. A few of the artists I followed around I just wanted to put in my pocket and take home with me, they were so kind. And they truly enjoyed being there and meeting their fans.

One of my favorite moments was listening to artists who have been part of CMA for years reminisce about “the old days” of Fan Fair. And how many has they general consensus that they missed the Fairgrounds days, because they felt it was more personal. And that is what makes CMA Fest so amazing, and it is what, to me, sets country music apart for other genres. The love between artists and fans, which has been the heart of the genre since before Fan Fair started in 1972.

Back to it being different, though. It was mostly in vibe. It seemed more subdued, but also more structured.

There were new stages to see your favorite artists, and I noticed a lot of names doing performances that I haven’t seen on the roster in a while. Many of those stages were free, making paying for a CMA Fest pass unnecessary. There were spin-off performances in bars around town, too. They weren’t directly part of CMA Fest, but they were all most definitely happening because of it. You had countless options to see countless artists all week.

But at the same time, there were big chunks of the event that felt smaller. Maybe it was because I wasn’t out in it as a fan so I didn’t even see parts of it, but i couldn’t help but notice Broadway was only closed for a couple of blocks by the end of the week versus being closed through 5th street all week. I didn’t wander around Fan Fair X outside of the locations I was in with the artists I was with, but it didn’t overwhelm me with sensory overload as it has in the past. But, again, it could have just been my perceptions.

I’ll be very curious to see where CMA Fest goes from here. How it will evolve, and if the different is the new norm. Will they continue to have the free stages around downtown, or will it some day return to being an event you must have tickets to attend. Time and the world around us will tell. For now, I’m just thankful for the experience once again, and reiterate that I love CMA Fest…. and I probably always will.

Spotted at a bike show this weekend... #lifeissh

River is fascinated by the rain falling outside. H

Love filled the room today as we celebrated the li

Mine and my husband's (@craigmattoxkeys) world got

The wheels kept turning, and they brought him home

I call them God winks: When something so random se

It's been one week since I basically shut down wit