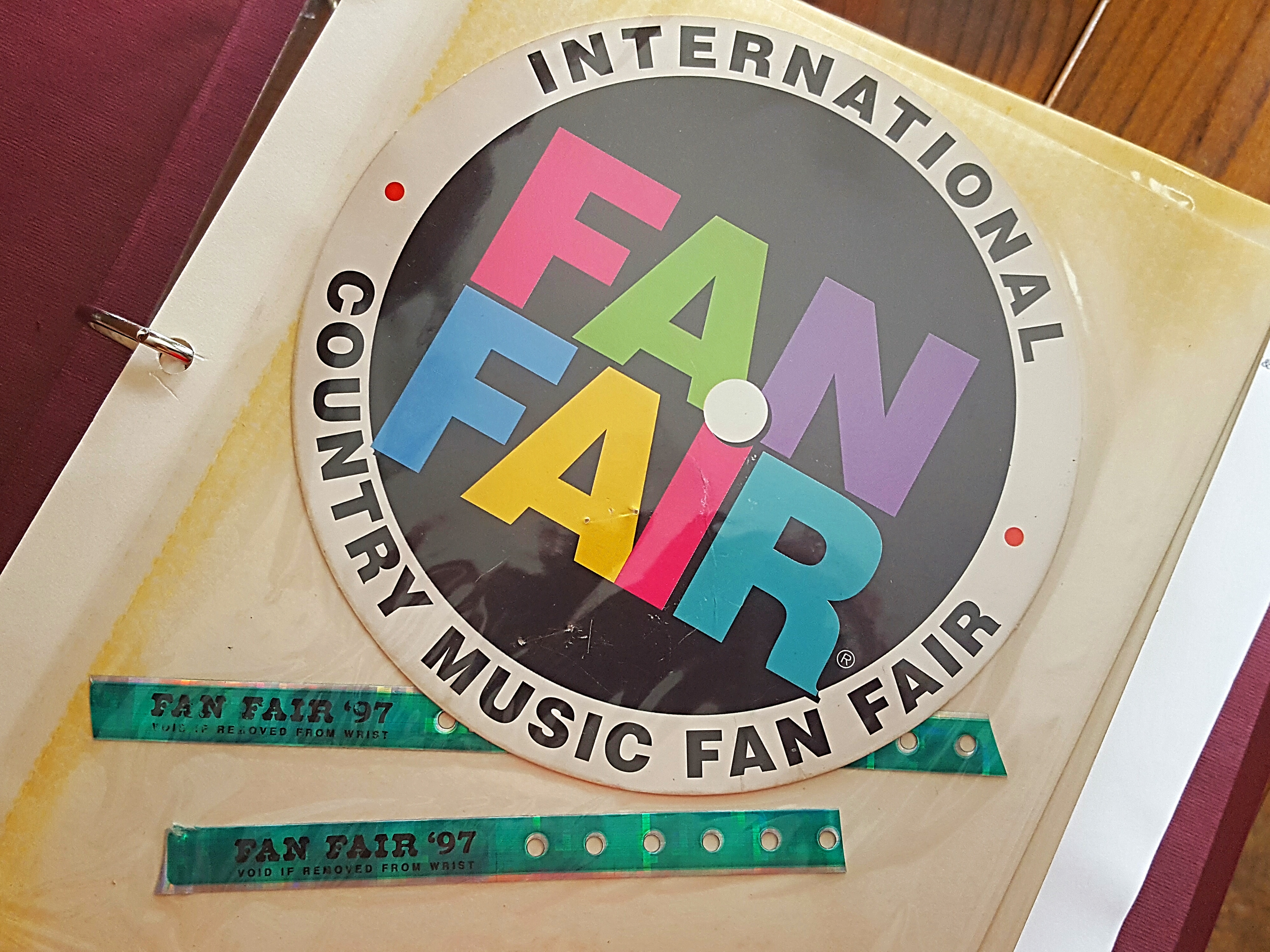 Mid-June 1997, I rolled across the city limits of Nashville, TN for the first time. I was 16 and my parents and I were about to experience our very first Fan Fair event. I remember commenting at some point that I felt like I was at home in Nashville, and here it is 20 years later and I’ve called Nashville “home” for over 10 years.

Today is the actual first day of CMA Fest 2017 (as Fan Fair came to be called as of 2004), and I can’t help but take time to reminisce to 20 years ago… and marvel over how much has changed since then.

> I blogged about Fan Fair/CMA Fest many times over on Musician’s Widow. <

I like to occasionally pull out the photo album I have from 1997’s trip, and a few years ago I noticed one of the band members on stage back then is today a good friend of mine. It made me smile, because back then I will admit that I didn’t pay much attention to the side guys… certainly never realizing I’d be married to a “side guy” some day.

I took a lot of pictures of the buses and trucks, awestruck by them. Wondering what it was like to be on one of those. Never knowing some day my life would revolve around tour buses.

I didn’t know much about Tennessee or Nashville back then. Trisha Yearwood’s song about, “Wrong Side of Memphis” somehow had me believing once we got through Memphis it would only be about a 30 minute drive and we’d be in Nashville. Boy was I wrong there! A fact that still makes me laugh to this day.

I remember we went through a travel agency. where we booked our Fan Fair tickets, Grand Ole Opry Tickets and hotel room in one shot. We stayed down in Murfreesboro, which being from Texas the drive was nothing to us — we go that far to buy groceries! — and the traffic back then was nothing like it is today.

As I flip through the photos from 1997, I marvel at how many artists I was so giddy to see then that have now become friends, or at least acquaintances, and if there’s one thing I regret, its not taking more photos of Nashville the city. I wish I had photos of Broadway back then, and the skyline. I do know the Hall of Fame was still at the foot of the Row back then. And I did get a picture of the Plant Hollywood building, which is today Margaritaville.

We attended the Grand Ole Opry, where I saw Porter Wagoner, Little Jimmy Dickens, and the “new act” featured was Ricky Van Shelton that night. Who knew some day my husband would play on the Opry, and I’d be well acquainted with backstage to the point the security guard said to me once, “Been too long since you were here!” with a smile. (I admit, it breaks my heart that my husband hasn’t played the Opry in over a year… and we have no idea when/if he will again.)

My dad was such a trooper that Saturday night, as we left the Opry and drove through the night to get me back in time for “Flag Camp” that started that Monday. I remember very proudly wearing my newly autographed Bryan White baseball cap to camp, and wanting to tell everyone about my previous week’s adventure.

Fast forward through the years. I eventually made Nashville my home. I’ve either “worked” CMA Fest (in a bar that hosted events during the week) or I’ve actually attended it multiple times over the last 10 years. It’s a lot different than it was in 1997, not only in size, as I already said, but also in its being downtown. I find myself looking at the week more as a local than as a music fan.

“I want to be far, far away from downtown this week,” I often say. Or, “Oh my gosh so many tourists clogging up the interstate.” CMA Fest is more as a headache than as something to get excited about these days.

But deep down… DEEP DOWN I remember attending as a music fan. And I get it. I totally get the excitement and approach to the week by music fans. We poke fun at fanny packs and people who unabashedly show up dressed in concert t-shirts and cowboy hats they clearly bought for this one week. But I get it. I was one of them. And its a memory I will cherish forever. You can say it helped send me down the path of life I’m on today.

This Tuesday, I went and took photos as WSM-AM of a new artist who, turns out, is at her first CMA Fest this year. As we parted I told her that 20 years ago it was MY first CMA Fest… and here I am today a (fledgling) photographer in Nashville. You hear it a lot around here, because its a city full of dreamers, but: “Don’t give up.”

When I look back at Fan Fair 1997, I realize that my dream of living in Nashville DID come true. And, in a roundabout way, the dream of being a journalist in Nashville came true too — its just not in the traditional sense of the word. I didn’t give up. And I am still never giving up. So many dreams left to dream. So many more to fulfill… here’s to the next 20 years.